What Is In Development? A Peek Into The Pipeline.

Premium IOLs are revolutionizing cataract surgery by giving patients new options for excellent vision without glasses. The next generation of IOLs is bringing us closer to the goals of perfect refractive results and excellent accommodative amplitudes for patients.

The recently introduced Tecnis Multifocal IOL (Abbott Medical Optics Inc., Santa Ana, CA) has a diffractive optic, like that of the AcrySof Restor IOL (Alcon Laboratories, Inc., Fort Worth, TX). The diffractive ridges of the former, however, extend all the way to the edge of the optic, which should give patients better reading ability in low-light settings such as a dimly lit restaurant.1 A major difficulty with diffractive optics is chromatic aberration, which is generally worse than with refractive optics. Chromatic aberration reduces image quality in normal white light because each of its color wavelengths refracts differently. The Tecnis Multifocal IOL is made of an acrylic material with chromatic aberration, which is better than that of the crystalline lens. This helps optimize the focus of normal white light for distance and near vision. The approval of toric multifocal lenses, such as the Acri.Lisa (Carl Zeiss Meditec AG, Jena, Germany),2 should not be far off, and these IOLs more accurately correct preoperative astigmatism than limbal relaxing incisions.

The next lens most likely to gain FDA approval is the Synchrony dual-optic accommodating IOL (Visiogen Inc., Irvine, CA). The Synchrony has an anterior optic with a high plus power and a posterior optic with a high negative power (Figure 1). The dual-optic design yields a power that is equivalent to that of a standard IOL. While the ciliary body is relaxed, the two optics are relatively close together for distance vision. As the ciliary body contracts and the zonule relaxes, the optics move apart, thus increasing the power of the lens and resulting in near acuity. Theoretically, 1.5 mm of separation should result in about 3.50 D of accommodation. 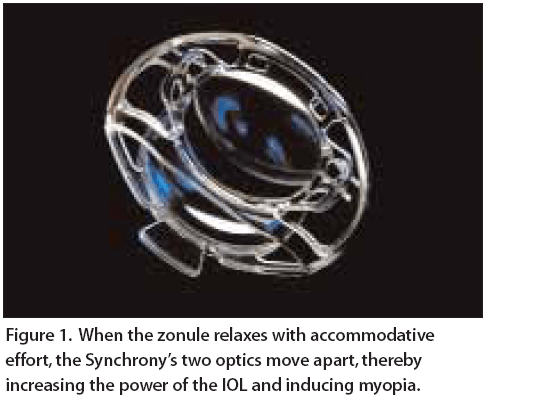 In a prospective study, presented at the 2009 ASCRS meeting, Ossma and colleagues randomly assigned 100 subjects to receive either a Synchrony IOL or an AcrySof Restor IOL in both of their eyes. Distance and near vision was equivalent with the two lenses, but the Synchrony provided significantly better binocular intermediate vision at 60 cm. A subjective perception of glare and halos at night was more common in the AcrySof Restor group.

Because of the dual optics, implanting the Synchrony lens is like placing two IOLs simultaneously, which makes it more difficult to insert than standard IOLs. Also, the eye tends to be myopic after the lens’ implantation and to have a variable drift toward emmetropia as the capsular bag heals.

Another accommodating IOL in the FDA approval pipeline is the Tetraflex (Lenstec, Inc., St. Petersburg, FL). Like the Crystalens (Bausch & Lomb, Rochester, NY), the Tetraflex has two haptics, but it is anteriorly vaulted, unlike standard PCIOLs (Figure 2). As the Tetraflex moves anteriorly with vitreous pressure, higher-order aberrations develop that augment near acuity. In the FDA study, 32% of eyes with the Tetraflex lens could read 80 words per minute with 20/40 print versus 6% in a matched control group that received a standard monofocal IOL. All patients in the FDA phase 3 study have completed 1 year of follow-up, and the company plans for an FDA premarket approval submission this fall (Jim Simms, oral communication, August 2009). 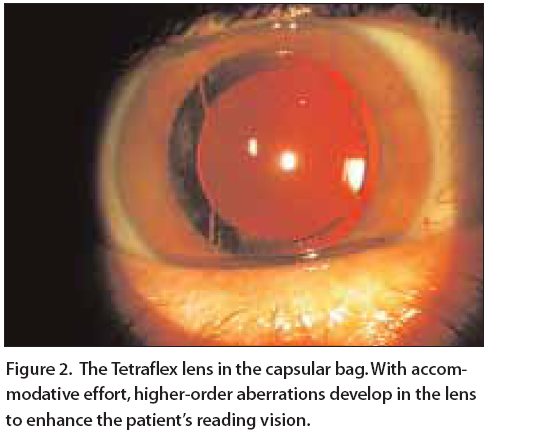 The 1CU lens (HumanOptics AG, Erlangen, Germany) is available in Europe but not the United States. This accommodating IOL has four broad haptics that fill the capsular bag, which may allow better coupling of the movements of the ciliary body and zonule with the IOL. The mechanism of accommodation is similar to that of the Crystalens, which moves anteriorly when the zonule relaxes with accommodative effort and thus increases its effective power and reduces myopia (Figure 3). 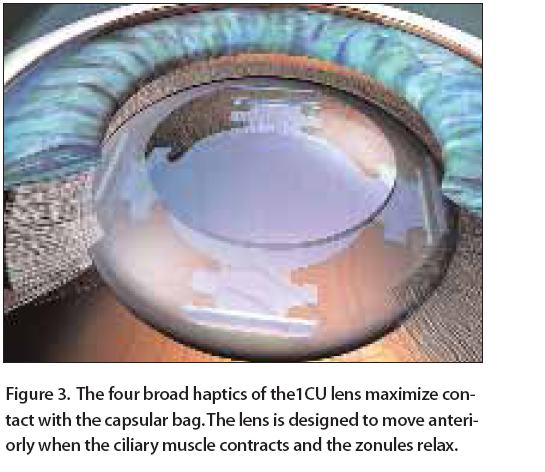 The challenge with any IOL is to obtain the correct refractive power. Placing an accommodating lens in an eye but failing to achieve emmetropia leaves the patient either with limited accommodation in the case of a hyperopic result or with poor distance vision with a myopic result. Accurate refractive outcomes are the sine qua non of premium IOL surgery, and despite advances in biometry, they remain somewhat unpredictable. The Light Adjustable Lens (Calhoun Vision, Inc., Pasadena, CA) is designed to address this problem. Made of a photosensitive silicone material, this threepiece lens is implanted in the standard fashion. One to 2 weeks postoperatively, the surgeon measures the patient’s refractive error. Then, using Calhoun’s Light Delivery Device (Calhoun Vision, Inc.) (Figure 4), the surgeon shines ultraviolet light on the lens through a dilated pupil. This process changes the shape of the silicone lens to correct any residual refractive error. The Light Adjustable Lens corrects up to 2.00 D of myopia, hyperopia, and astigmatism. 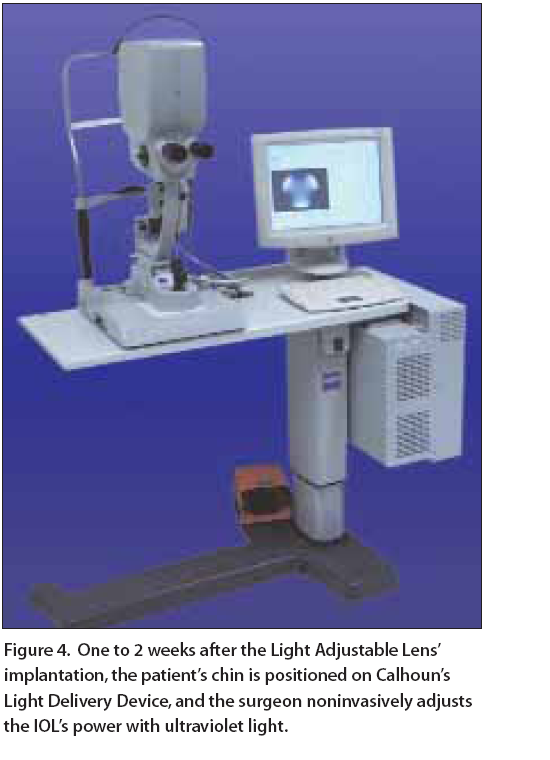 The mean UCVA after implantation of the IOLs is 20/20 versus about 20/30 with standard IOLs (Pablo Artal, MD, oral communication, April 2008). The Light Adjustable Lens is currently available commercially in Europe, and FDA phase 2 clinical trials began in January 2009.

Robert K. Maloney, MD, is in private practice with and one of the Directors of the Maloney-Shamie Vision Institute in Los Angeles. He is a consultant to Abbott Medical Optic Inc. and is chief medical officer for Calhoun Vision, Inc. Dr. Maloney may be reached at 877-999-3937; [email protected].

Find out if you are a candidate by calling or emailing today.

Want to see it all, without your glasses? To schedule your Complimentary LASIK Consultation, call us at.

More than 500 eye doctors or their family members from around the world have chosen Dr. Maloney & Dr. Shamie to perform their surgery. Shouldn’t you?